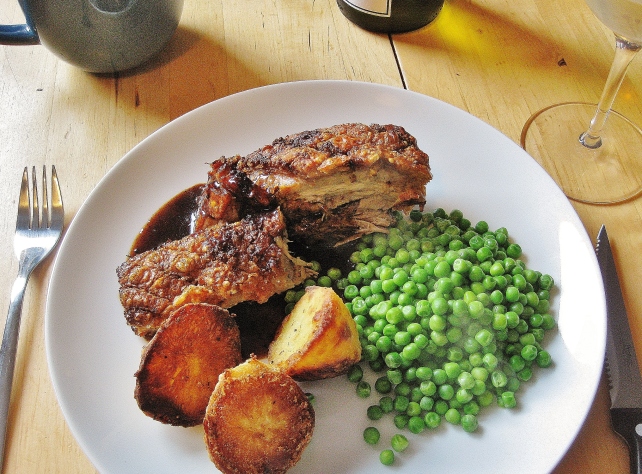 As I’ve discussed before, pork is one of our favourite meats in this household. Apart from shoulder, which is a gorgeous cut if you want melt-in-the-mouth pulled pork, pork belly has to be our favourite piece of pig. It is a rich, indulgent, flavoursome bit of meat, due to the high fat content, and although it’s probably not wise to add it to your weekly meals, it’s the perfect choice for a special dinner. An added bonus is that, due to this high fat content, it is a very cheap cut (the piece I bought for the recipe below cost about £3, which is far, far cheaper than an equivalent piece of roasting beef or lamb, or even a small chicken).

The main appeal of pork belly is the mouth-watering crackling that you can produce from the skin and the layer of fat below, but the meat underneath should not be overlooked. If cooked right, the meat in pork belly should be tender and juicy. In order to achieve both crispy skin and succulent meat, the cut needs a combination of quick, high blasts of heat and slow cooking at a low temperature. I’ve cooked pork belly many times in the past, but this was the first time I did a flash cook at a high temperature both at the start and the end of cooking. And though I do say so myself, it was the best pork belly I have ever cooked. Are you sold yet?… 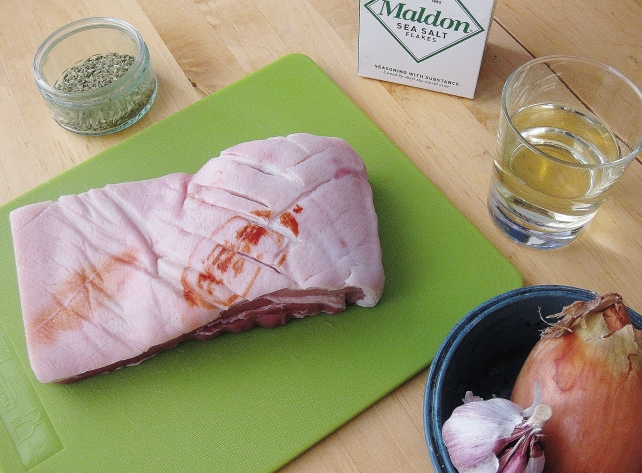 For the gravy: 1 tbsp corn flour

1 chicken stock cube, made up with 250ml boiling water

Method 1. Gently bash the fennel in a mortar and pestle to open the seeds and release the flavours. Rub into the underside of the pork belly, along with a generous grind of black pepper.

Are you sold now? Seriously, I’m salivating just now just writing about it… 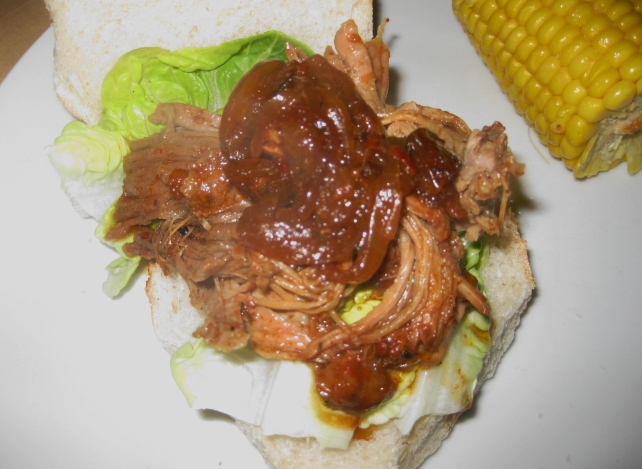 Since I started this blog, Ross has been angling to be featured and is constantly trying to get a thumbs-up in a photograph. Unfortunately, when it comes to baking Ross can leave much to be desired…I speak from experience and vividly remember him dropping not one but two eggs while attempting to make brownies. And no, we did not have spare eggs. However, when it comes to savoury food I have to give him his dues: Ross is a great cook. This recipe was very much a joint creation, using our all-time favourite meat. Although I love a juicy steak as much as the next chap and my mouth waters at the smell of roast duck, the versatility of pork is just amazing. Our favourite way to cook pork is slowly until the meat falls apart and needs shredding rather than slicing. You can’t beat it.

We were recently very kindly given a magnificent red and black tagine as a housewarming gift, and wanted to try it out immediately. Although tempted by a traditional lamb tagine recipe, we decided to go a bit more experimental with a BBQ flavoured slow-cooked pork shoulder. At first glance, the fairly lengthy ingredients list may fool you into thinking that this is a complicated recipe. Don’t be fooled! This recipe could not be simpler: chuck a load of flavourings on a piece of meat and leave it to marinade, slice some onions, pour over some liquid and then bung everything in the oven for 6 hours. All the magic will happen as the pork rests in the fridge, soaking up the sweet and spicy flavours, and while it slowly bubbles away in the oven, becoming melt in the mouth. The only thing you need to commit to this recipe is time. (And on a side note, if you really don’t have that, then the marinade sauce should work nicely in other situations – perhaps barbecued pork kebabs or grilled chicken drumsticks or wings). 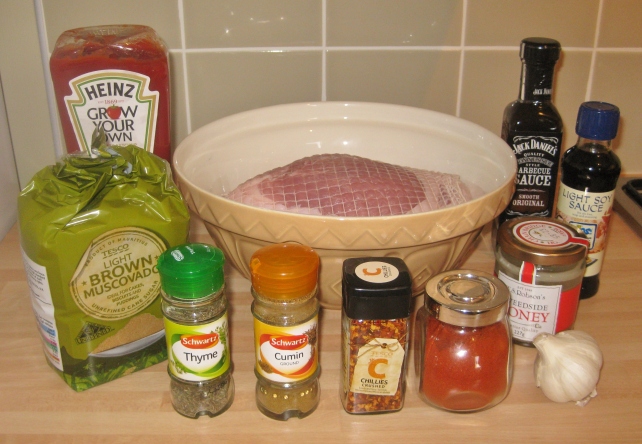 Method 1. Wash your pork shoulder and pat dry with some paper towels. Pro tip: remember to remove any string from your pork before you start on the marinade. Makes for less mess later…. 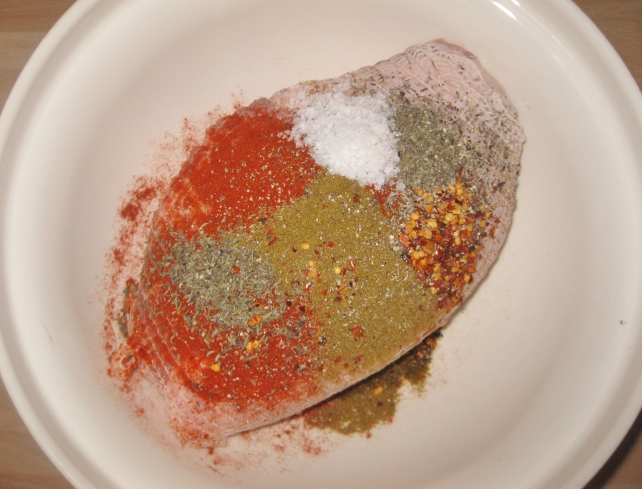 2. Place the pork in a large bowl and add the dry marinade ingredients (sugar, paprika, thyme, cumin, salt, pepper, chilli and garlic). Now it’s time to get your hands dirty and give that baby a bit of love and attention. Alternatively your sous chef can do the massaging…. 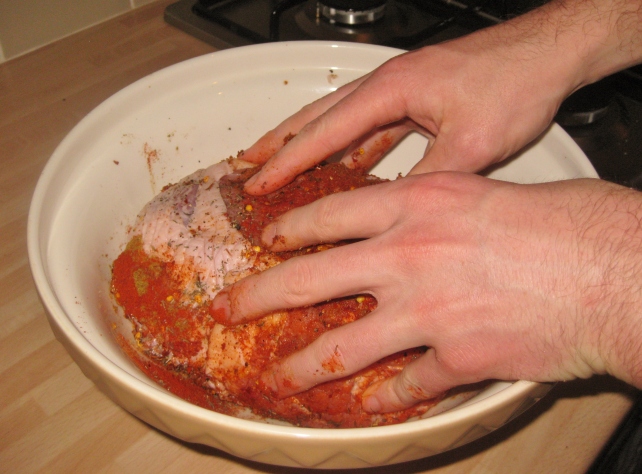 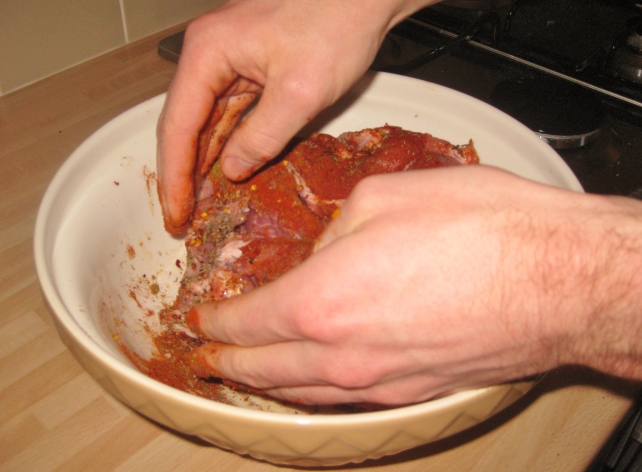 3. Add the wet marinade ingredients (ketchup, BBQ sauce, soy sauce, vinegar and honey) and give everything a good mix up. Cover with cling film and leave in the fridge. Ideally you really want to let the meat marinade over night to let the flavours infuse properly, but if you don’t have this much time then just leave it as long as you can. 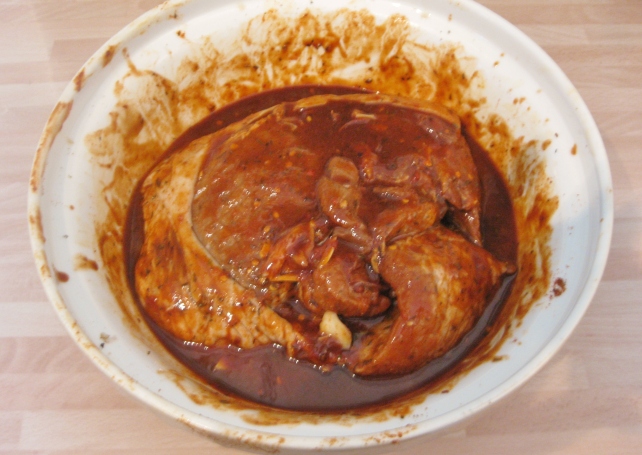 4. The next day remember to take the meat out of the fridge for a couple of hours before cooking to allow it to come to room temperature. Preheat the oven to 130C fan/150C/Gas Mark 2. 5. Thinly slice the onions and place in the bottom of the tagine. It will seem like a huge amount of onions, but trust me you want this – these will cook down beautifully and soak up all the delicious flavours from the meat. Juicy, sweet yumminess. 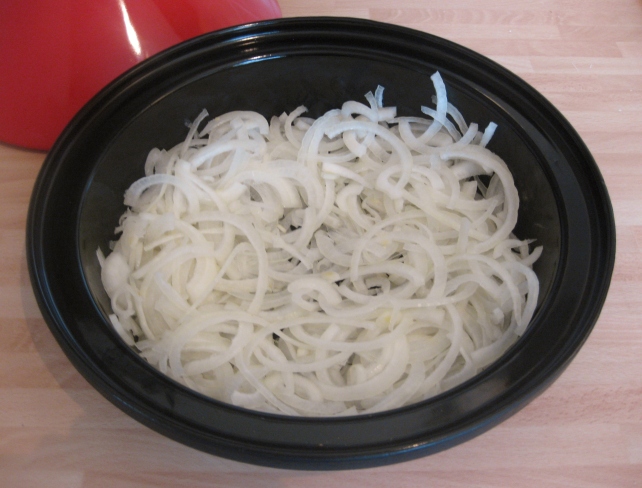 6. Place the meat on top of the onions, scraping out every last drop of the marinade. Crumble the stock cube and pour the apple juice around the pork. Top up with a little water so the liquid comes about a third of the way up the tagine dish. Drizzle a little olive oil over the top of the meat, top the tagine with its elegant hat and pop in the oven for 6 hours. 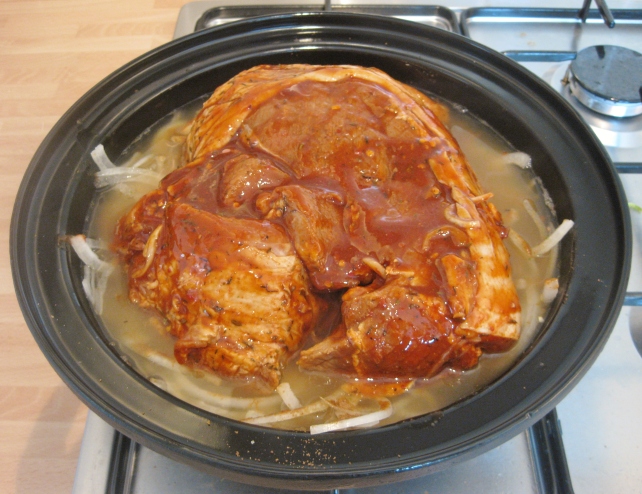 When 6 hours is up you will be left with succulent, tender meat that just falls apart, a sticky, sweet, spicy and sour sauce and soft onions underneath. Don’t be scared of how dark the crust of the meat is – this happens because of the high sugar content in the marinade, but the inside will be as moist as you could want. Remove the dark skin and fat from the pork and use two forks to shred the meat. 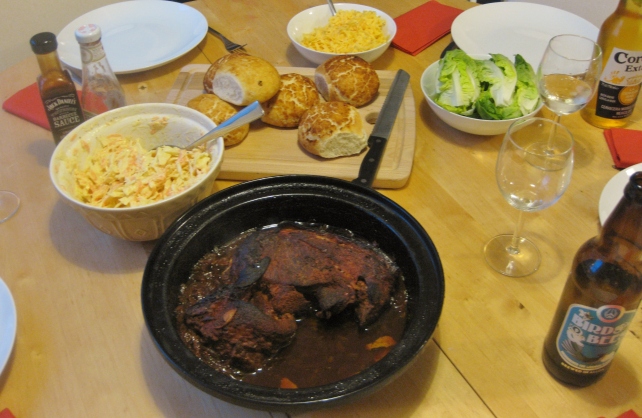 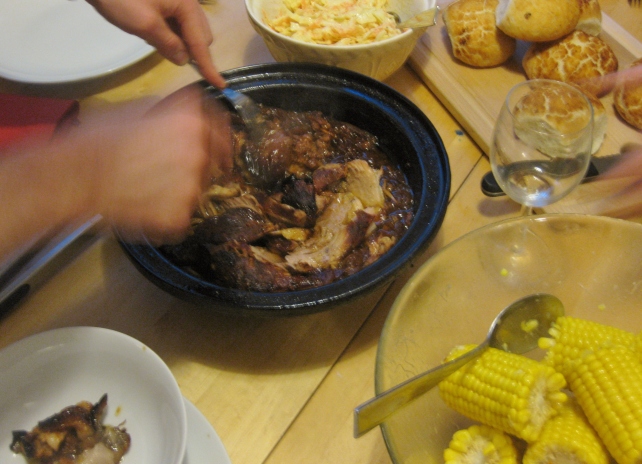 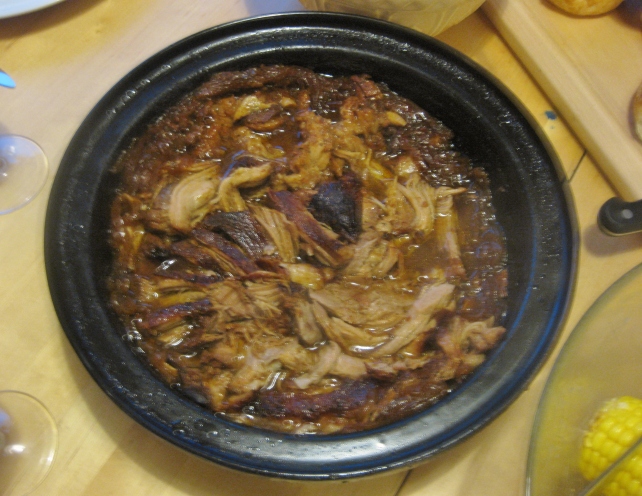 (Apologies for the poor quality photo. I could try and blame it on the steam rising from the pork but really I think it’s down to a combination of eager anticipation for dinner and already having had a large glass of bubbly and a G&T…)

We served the pork with crusty rolls, buttered corn on the cob, grated cheese and homemade coleslaw. You could also go down the tortilla-wrap-salsa-guacamole route. 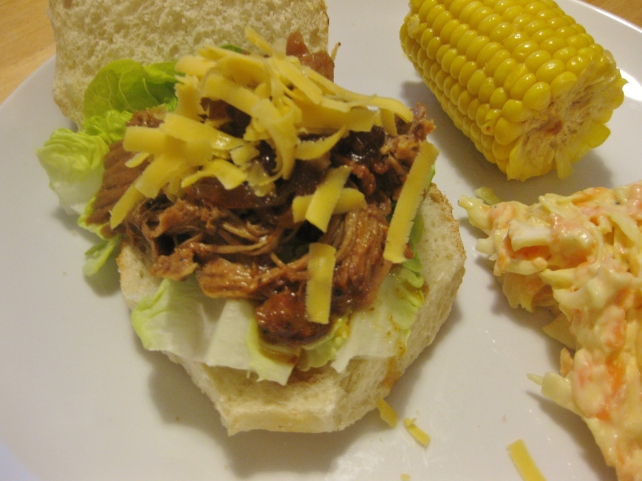 If the above description and pictures hasn’t convinced you to make this, I wish there was some way I could transfer the smell of the dish through the computer screen because that would definitely have you converted. I had to sit in the flat, marking assignments, for 6 hours as the mouth-watering scent wafted through the flat. It was unbearable! Please don’t worry if you don’t have a tagine – you can still make this in a heavy cast iron pot in the oven covered with a lid, or even in a roasting tin covered in foil. Just treat your pork lovingly with a well-infused marinade and low, slow cooking and you cannot go wrong!